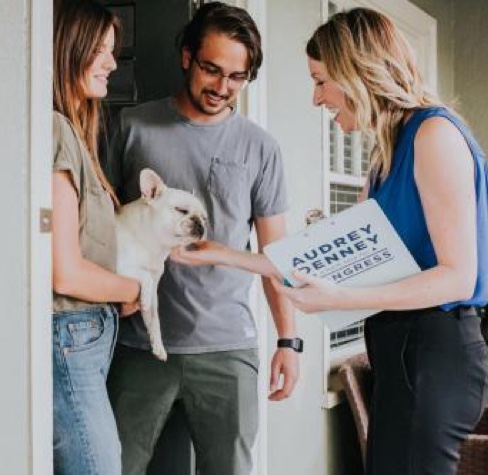 “Until the members of the House of Representatives and Senate aren’t bought and paid for by special interests, we won’t ever see actual, meaningful and lasting change. We have to elect a generation of leadership that wants to be true public servants and wants to fight for and work for real people.”

Audrey spent her childhood on her family’s farm and ranch in Central California. They grew hay and wine grapes, and raised beef cattle and draft horses. Her father was a Vietnam Veteran and her mother was a leader in their church. Growing up this way instilled in Audrey a strong work ethic and a respect for land and natural resources, which she has carried with her throughout her education and career. From an early age, she was active in 4-H and other service-learning organizations, served as a California FFA State Officer, and also was named a National Beef Ambassador representing the beef industry around the country.

Audrey earned a bachelor’s and a master’s degree in Agricultural Education from California State University, Chico. She taught agriculture at California State University, and was known for her ability to inspire and engage students through her enthusiastic and pragmatic approach. She spent one year as a volunteer working with rural youth on agriculture projects in El Salvador, and another year working for a nonprofit in West Africa.

Now Audrey is a Senior Learning Designer at Vivayic, designing learning strategy and curriculum for worldwide agricultural companies and nonprofits, including the American Farm Bureau Foundation for Agriculture, National Cattlemen’s Beef Association, and the World Bank.

Audrey is running for Congress because the people of California’s first district need a representative who is effective and will fight for their best interest. We need a leader who only works for their constituents, not for corporate interests and political gamesmanship. A representative who will fight against the political leaders that stand in the way of what is best for this district, regardless of what party they come from. Audrey has proven time and again that she has the passion, the skills, the energy, and the strength of character to do just that.